The education industry is seen by governments around the globe as an increasing contributor to a country’s national wealth and economic development. This blog details the most significant emerging trends in the education landscape in Australia and how it is becoming the most preferred choice for international students at the Bachelor’s Pass level, Master’s Coursework and Master’s Research level.

Statistics published by the Australian Government Department of Education and Learning show that the highest number of students arriving in Australia for higher education come from South-East and Central Asia; particularly, China, Malaysia, Singapore, Vietnam and India.

The reports show that there has been a major leap in the influx of Indian students coming into the country for higher education, with a staggering 47.6% increase from the year 2013. This makes India one of the largest exporters of international students, following China and followed by Malaysia.

Though Iraq, Egypt and Nepal don’t fall under the top 5 countries

that have outbound mobile students to Australia; all three countries have shown a relatively significant increase in the number of students between the years 2013 at 2014, with figures at 51.8%, 40% and 33.8%, respectively.

There are plenty of reasons for these hefty figures and a growing international student population in Australia, apart from Australia being sunny all year round –

To add to the long list of benefits, Australia’s English language requirements (IELTS, TOEFL) for universities have been relaxed and institutions now allow the partners/spouses of the applicants to apply along and secure places in institutes or vocational courses quickly and without difficulty.

Fig.1 – Pie chart showing Percentage increase (from 2013-2014) in the number of overseas students coming from the top 5 nationalities studying in Australia 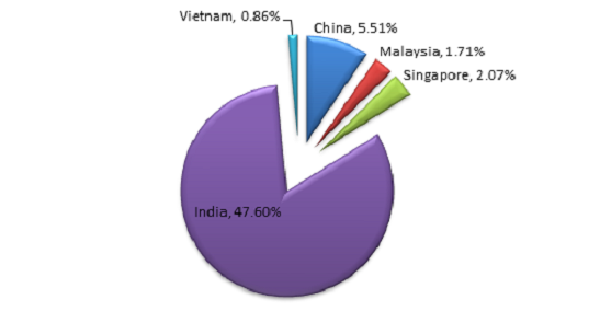 Here are other interesting statistics about the choice of courses for international students as per trends observed and published by the Australian Government department of Education and Learning, in 2013 and 2014 –

The top 3 subject choices for higher study in Australia are Management and Commerce, Engineering and Related Technology and Information Technology at the Bachelor’s Pass level. This is followed by a second category of popular courses that include Health, Society and Culture and other non-award courses at the Bachelors and Masters (by Coursework) levels.

Engineering and Related technologies has seen a whopping 4987% leap from 2013 to 2014 at the Bachelor’s Pass level, because the job market for Engineers in Australia has doubled over the past year and has opened portals to more lucrative opportunities to overseas students. In the year 2013, a total of 84 students had taken up the subject, whilst in 2014, the same course received 4273 international students.

Management and Commerce at the Doctorate (by Research) level has shown a stark increase of 368% of students from the year 2013 to 2014. Also, in the year 2014 alone, a total of 89,868 international students took up the subject at the Bachelor’s Pass level and 60,334 took up the course at the Masters (By Coursework) level, making Management and Commerce one of the most popular choices for study among international students.

Though Creative Arts doesn’t have a very high cumulative total of overseas students, it has seen a major leap of 630% from the year 2013 to 2014 at the Bachelor’s Entry level. According to statistics, there was a summative figure of 30 students for the course in 2013. The year 2014 had as much as 219 students for the same course, indicating a growth in the popularity of the ‘Creative Arts’ field.

A relatively medium chasm remains between male and female student rates in Australia. 2013 showed that there was a total of 1, 68,089 males while there were 1,60,313 females for the same year. There has been a 7.4% increase since, in the number of males opting for higher education in Australia in 2014, with a corresponding, 4.1% increase in the number of female students.

“It is predicted that within the next decade, Australia is going to have the largest percentage of inbound international students, particularly from China and India and followed by Malaysia, Nepal and Saudi Arabia between 000's-020” – Britishcouncil.Org

This is further exemplified by the bar chart below – 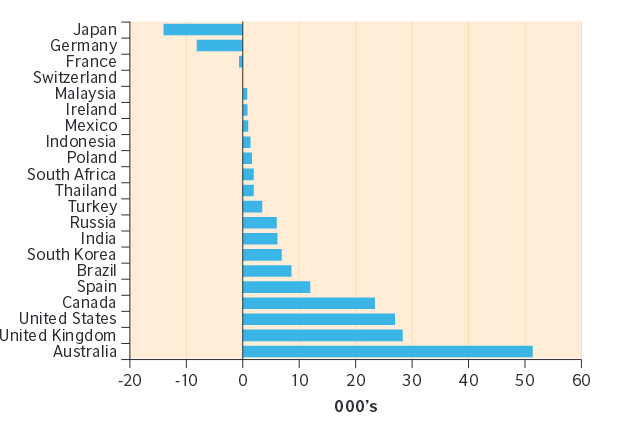 With the statistics listed above, take a look at the top 10 universities in Australia that are attracting foreign students for 2013-2014 –

This is the first of the many detailed studies that we will be publishing about the trends in Education Sectors around the world. While this one focused on the emerging education trends in Australia, there will be more articles on the education trends on other countries in the upcoming weeks.

Stay connected with GetFriday for more such interesting insights and follow us on our social media sites for further updates!

'Insights' is an internal team at GetFriday, working very closely with entrepreneurs and small business owners all across the globe. GetFriday's Insights team consist of the sales, marketing, SEO, content and operations professionals of the company, who are all very dedicated towards their work and who strive to engage, inform and impart valuable knowledge and research to business professionals across multiple industries.