“Chance favors the prepared mind.” That was a quote from the French microbiologist, chemist and inventor, Louis Pasteur. Incidentally, he was a master of experimental research. Being not so interested in theory, he made many fundamental discoveries just by careful observation.

Serendipity; A word coined by Sir Horace Walpole, Earl of Oxford in the 1700s to denote ‘accidental discoveries‘. Walpole was a prolific letter writer. In one of his letters to a friend, Walpole wrote about a silly fairy tale called ‘The Three Princes of Serendip’; “… as their highnesses travelled, they were always making discoveries, by accidents and sagacity, of things which they were not in quest of” (Serendip, old name for Ceylon, Sri Lanka) that had made a profound impression on his life. The tale described the fate of three princes who left their home to travel through the world. Rarely they found the treasures they were looking for but ran into other ones equally great or even greater which they were not seeking.

Interesting, ‘yes’ but you may wonder what is the context here? The point am trying to make is that Get Friday(Sister Concern of YMII) was also a stroke of serendipity, something that happened by chance. But did happen because we had cultivated a mind that was prepared. A mind that was open to ideas that had never been tried before. Let me tell you the story so that you can understand what I mean:

Before 2005, this company was only in the business of providing concierge services in India to Indian expats living overseas. Basically running errands for them and helping them manage their responsibilities and matters back home. That service went by the name ‘Your Man In India(YMII)’. Was a one of a kind pioneering service in those times and hence received a lot of media attention. (free publicity!!! chance was definitely helping us big time)

On 17 May, 2005 quite fortuitously I must add, we (Prabhu, my colleague and me) received a mail from a gentleman in NY. His name was AJ Jacobs. Luckily I was able to retrieve the exact mail we received. Here it goes:

I heard about your company from a friend of mine who is an Indian businessman living in California.
I’m a writer for an American magazine called ESQUIRE. It’s an upscale magazine targeted at businessmen, and reaches 2 million readers. It’s been around for 70 years. (If you want to know more, it’s at esquire.com).

I’m writing an article for Esquire for which I’d love to hire Your Man in India(YMII). The idea is this: To hire a talented person or talented people in India to take care of as many of my life tasks as possible. Almost like a remote executive assistant.

For instance, I’d love someone to help make airline reservations over the Internet. Or make restaurant reservations. Or pay my bills online. I’d even be interested in having someone answer my emails for me. Of course, I would give your company credit in the article. The publicity would, I imagine, be excellent for your business. And naturally, Esquire would pay the going rate for your services.

I understand that the core of your business is doing such tasks for residents of India (e.g. buying movie tickets for Indian movie theaters). But since so much can be accomplished via the Internet, I thought that you might be able to help me with US-based tasks as well.

I hope you like the idea. I think it will make an educational and entertaining article. Please let me know your thoughts. I can be reached via email here, or by cell phone.

We were kind of zapped by the request and were trying to figure out if this was some kind of a practical joke. More so because we realized later that Jacobs wanted to outsource a lot more than the quite innocuous sounding things, he mentioned in his first mail. He wanted to outsource his personal life to a company in India. That was a whole lot tricky. Back in 2005, it could have been an idea that naturally gets shot down because no one had attempted it before. So why should we even try!

Thankfully, we decided to pursue it. It all started with just one employee to boot and this person helped Jacobs over the next couple of months. Despite the odd slip ups here and there, largely due to cultural differences the experiment was a huge success.

AJ’s Esquire article came out in September 2005. It went to capture the imagination of the American press and we were on Good Morning America, the next day. 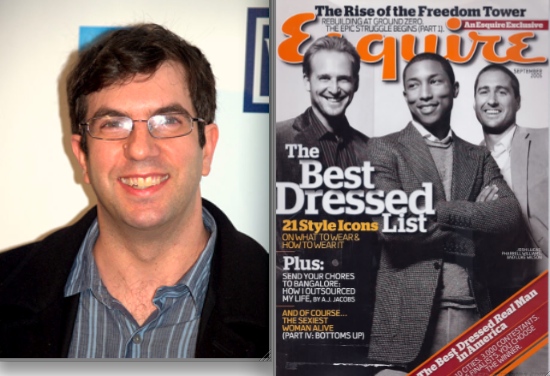 That is when we decided that we just couldn’t let this opportunity go. There was a potential and we were in the right place, at the right time. So we created a separate division and went out with a new brand called ‘Get Friday‘. (inspired by Man Friday from the Robinson Crusoe novel).

There, of course would be a question in everyone’s mind. If the character, Man Friday inspired this name then why was it not called by the same name. Why Get Friday?.

We weighed the pros and cons of gender bias in a brand name that was to go international. Especially, since we envisioned many girl fridays helping clients across the world. These things weighed in to settle the matter in favor of a gender-neutral ‘Get Friday‘.

That led me to believe that a lot of things do happen by chance, but provided it encounters a prepared mind. And that pretty much has been the cornerstone of our innovation philosophy, to this day.

I hope you like this little story of how it all began.